Episode 8/11…wherein I celebrate my love of rocks

Does anyone else like playing “Map” as much as I do? When we were kids, Dad got us a copy of the Reader’s Digest Atlas of the World. It was the cheapest babysitter in history, keeping my brothers and me occupied for hours on end. On further investigation just now, I see the book actually weighs close to six pounds (2.6 kg), and the 1963 version we had back then, in pristine condition today, would cost up to $850. Not that I want a copy actually. I think I’ll settle for Google Maps and Wikipedia to do research from the comfort of my hotel room here in Wales.

Last night I learned that Lamphey, the tiny village where we are staying, had a population of 843 in 2011. The closest town nearby is Pembroke (pop. 7,552), and of course that made me smile because the town next to where I live in New Hampshire is also called Pembroke. Over the next two days we will be traveling all around Pembrokeshire, a county set in the southwest peninsular tip of Wales. And here are your maps for today! 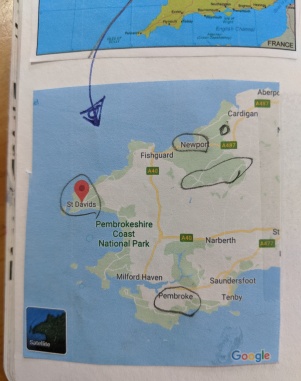 After our usual breakfast (and my sneaking an extra cup of tea and milk into my thermos/flask), we set off in a huge counter-clockwise (anti-clockwise!) circle around Pembrokeshire. The day began very overcast, so in honor of that, I decided to do sketches solely in ink, without a bit of tint or color brushwork. One less decision to make, hurrah! (Side Note: When I am concentrating on a sketch though, I have to be really careful to listen for the murmurings of my tour group. Otherwise they could arrive back at the bus without me, and I would become that annoying last-on-board person!)

These dramatic slant-stacked slabs of bluestone rise up out of the ground and look like they were frozen in mid-thrust on their way to escape to the sky. In truth they look the way they do because of a combination of the shifting tectonic layers below, and centuries of erosion from above, combining to create these impressive outcroppings.

The nearby human-built dolmens, equally striking but in a different way, are there to mark the resting places of revered people from long ago. I see these grave markers more as sculptures, and I honor the designers and the actual builders of these monuments at least as much as the chiefs and nobles who are claimed to be their inspiration.

Back onto the coaches, and off to explore the Iron Age hillfort of Castell Henllys, dating back over 2,000 years. Excavation began over 20 years ago and continues today. Four roundhouses and a granary were created in more recent years to allow visitors like ourselves a way to vividly sense life in those days.

From the ancient village we headed west on the A487 toward Newport, the third largest city in Wales with a population of about 145,000. As it turned out, although we were scheduled to have our lunch in Newport, instead we stopped just north of there in Caerleon, home of the University of South Wales, a very pretty town on the River Usk.

(I am particularly fond of this place, because “USk” is the abbreviation used by the international organization, Urban Sketchers. Usk is close enough to USk to make me smile.)

Although the skies hadn’t cleared by lunchtime, the air was comfortably warm, the wind quite tolerable, so we were able to enjoy a brief walk around the town before we arrived at our destination: a restaurant located in what had been a stone priory dating back to the 12th century. Wonderful food of course, and the staff was able to get us in and out without any waiting. Very efficient and gracious, the monks would have been proud I am sure!

After lunch we continued on to St. Davids, (no apostrophe, and not plural either!), at one of the far southwest tips of Wales. It is the smallest ‘city’ in the UK and yet has a massive cathedral. I’m sure it is revered by people of deep faith, and would have been inspirational for any artist with stronger ‘let’s-draw-really-complex-architecture’ skills than I have! I preferred to spend my time sketching St. David’s presumed birthplace, at the humble Chapel of St Non. And yes, I caved: out came the watercolors when just a spot of late-afternoon sunlight illuminated the grassy knoll by the chapel.

The return trip from St Davids to our hotel was only about an hour, following the coast for a while through the Pembrokeshire Coast National Park, then continuing southeast and inland until we reached our home base of Lamphey. Most of us were less hungry than usual, but we still gathered in the dining hall at the appointed time because we knew we would only be together two more evenings after tonight.

After dinner we adjourned to the sitting room, where we were treated to a brief concert by a local harpist. The music was pleasing and restful, evoking memories of many of the places we had been this week.

The spirit of the group was shifting again, that mysterious coalescing of a readiness to head home soon, with a real fondness for the new friends we would have to leave behind. I am not yet enough of a seasoned traveler to be immune to these gentle pulls on my heart strings.

I live surrounded by watercolor brushes and paints, fountain pens, sketchbooks, and journals- often wanting more than anything to write and paint at the same time. If you like what you're reading, feel free to share it with others. If you see something that needs correction, please let me know. Thanks for visiting!
View all posts by Bobbie Herron →
This entry was posted in 2022 Fake Journal - "My Wales Tale", Pen & Ink, Watercolor and tagged Creative Habit, Creativity, Inspiration, Writing Habit. Bookmark the permalink.