Episode 5/11…wherein learning and note-taking surpass, for once, the urge to sketch 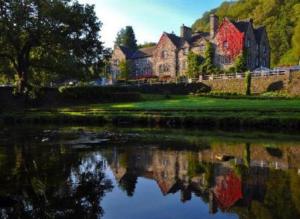 I took notes throughout the day today, and am compiling them this evening in my bedroom as usual. The difference tonight is that I don’t need to allow extra space for sketches because today they just didn’t happen. I frequently wish I could write and draw at the same time, and since I draw and write with the same pens (my trusty Lamy Safari fountain pen, the Pilot G-2-10 Bold, or fat Bic Cristal), it’s not usually hard to tuck a sketch into the middle of a sentence. Sometimes though, the tour is moving along so fast, or the information is so interesting, that the ‘add a visual image too’ button in my brain never gets touched. So today, I have only word images.

We started out this morning after breakfast with a short talk on the history of the slate industry in Wales, from the mining to the often-challenging transport of slate to far-off places. Soon we boarded our motor-coaches (which now feel like second homes!)  and headed off toward the southwest, to the heart of Snowdonia National Park. (I am so glad we had time to enjoy the scenery on prior days, because today was our first consistently misty-rainy day. Another reason I didn’t feel like doing outdoor sketching!)

Our first stop was at the Ffestiniog railway, originally built to transport slate from the mine to the coast. I was fascinated by the descriptor “narrow-gauge railway”— what on earth could that mean? As it turned out, I had seen them before, and I bet you have too. Picture an old-time movie showing coal miners working deep underground, pushing carts of coal on rail cars. The tracks are, by necessity, narrow to fit through the small tunnels and negotiate the relatively tight curves.

I learned that the parallel tracks of standard commercial railways are usually 56.5 inches apart. The tracks of narrow-gauge railways can be anywhere from 24 inches to 42 inches apart. The rails themselves are often made of lighter gauge metal, so these railways are less expensive to build. These narrow-gauge railways are used today throughout the world, especially where narrow mountain passes necessitate relatively tight curves in the rail bed. Who knew? I’ll never look at a set of tracks the same way again.

The trains we saw today were not just for admiring, they were for our next adventure as well. We boarded our train in  Blaenau Ffestiniog (I want to show you a map every time I mention a place name!), and headed  northwest, disembarking an hour later at the Llanberis Slate Museum. After all that time on the coaches and on the train, it felt so good to stretch our legs and move about a bit. Luckily the rain had stopped momentarily, so several of us took our Road-Scholar-supplied bag lunches and clustered ourselves outdoors to enjoy our sandwiches before moving on to the Museum tour.

Margaret and her husband Paul, a very nice couple from Fair Haven, Vermont, joined us for lunch. Ellen and I soon learned that Fair Haven is also famous for its slate quarries, and Paul had a wealth of knowledge because he had worked his entire life managing the main quarry there before he retired. Both Paul and Margaret were typical examples of the kind, curious, and intelligent people you meet on RS tours. Our network of friends gets woven tighter every day.

Those of us ‘think-ahead scout-types’ (including Paul, Margaret, Ellen, and myself) pulled out our waterproof cushions so we could sit comfortably on wet benches and stones walls while eating our lunches. (The ‘sit-upon’ I carry in my art-supply bag is as simple as it gets: it’s a blue and white plastic bubble-wrap Amazon shipping envelope. Cost me nothing, and if I ever leave it behind, it is quickly returned to me because my name and address are still on it!) We laughed when the four of us each pulled out our own version of a ‘keep-your-butt-dry’ cushion. Margaret said, “Is this a Girl Scout thing or a New England thing?” and suddenly we realized the four of us were from three contiguous states in America’s northeast corner. Takes one to know one!

The Museum tour was interesting and thankfully brief because we had one more stop on the agenda for the day: a field trip to the Royal Town of Caernarfon, whose ‘skyscrapers’ are actually the towers of the Caernarfon Castle. The tour, of course, included much history of conflicts. From Edward I in 1283, to major battles in the early 1400s, to the English Civil War from 1642 to 1651, the castle was besieged over and over again. In the 19th century the castle itself was seen as a place worth preserving for posterity, so repairs and restoration efforts began in earnest. Now it is a designated World Heritage Site, and is also where the investiture of Charles, Prince of Wales, happened in 1969.

Any place with such a long history is going to have a long history of conflict. To give credit where credit is due though, our tour guides at every location were skilled at keeping all visitors engaged and interested, by explaining not only the political history, but also pointing out the challenges faced when the castle was being constructed, as well as the cultural history of the local region. They put it all into context, explaining how today the people of Wales proudly cherish and protect their national identity, while having a relatively peaceful coexistence with the English who now live among them in many parts of Wales.

There are so many lessons to be learned, and I can’t help but think back to 2020, when all the people of the entire planet were stopped in their tracks, literally, because of a virus that wanted to kill us all. That pandemic was far deeper than any skirmish between nations. It seems we humans naturally focus on our differences; that is, until an external force scares us enough to force us to work together, regardless of skin color, eye color, hair color, or species. This blue-green marble called home is astounding when we are still enough to notice it.

I could stop here for today, and probably should because Ellen is drifting in and out of sleep, but this is our last night at the Royal Oak Hotel, and I promised myself I would look into the connection between this little town,and the English artists of the late 1700s to late 1800s, whom I  admire so much.

I learned today that during the Napoleonic Wars (1803–1815) it was impossible for artists to safely journey to places like the Alps in order to paint dramatic landscapes, so instead, English artists looked to the rugged mountains of England, Scotland, and Wales for inspiration. Northern Wales, especially the Snowdonia region, was particularly compelling. In 1790, even before European travel became difficult, the famous J.M.W. Turner visited the region to paint, and in the years to follow, artists such as David Cox were drawn specifically to Betws-y-Coed, the town where I sit at this very moment. Cox spent a great deal of time painting here, and inspired other artists to join him. After retirement he decided to spend each summer painting in Wales, and often stayed at the Royal Oak Hotel. He continued to produce and exhibit his Welsh watercolors every year thereafter, right up until his death in 1859.

In 2009 Welsh art historian Peter Lord wrote a book called, “The Betws-y-Coed Artists’ Colony, 1844-1914”.  A major exhibition and television series were also created, and together they inspired a great deal of interest worldwide. The book is in limited supply now and well beyond my budget unfortunately. Nevertheless it validates for me the fact that a single place of beauty, and one enthusiastic soul, can open the hearts of thousands.

I wonder how many other artists in the past, from David Cox’s time right up until today, have sat on that very embankment where I sat yesterday, sketching that same bridge, gazing at groups of other folks strolling along it on a similar springtime morning.

My watercolors and brushes are certainly coming out tomorrow!

I live surrounded by watercolor brushes and paints, fountain pens, sketchbooks, and journals- often wanting more than anything to write and paint at the same time. If you like what you're reading, feel free to share it with others. If you see something that needs correction, please let me know. Thanks for visiting!
View all posts by Bobbie Herron →
This entry was posted in 2022 Fake Journal - "My Wales Tale", 3- Magic: Art Epiphanies and tagged Creative Habit, Creativity, Inspiration, Writing Habit. Bookmark the permalink.

8 Responses to Episode 5/11…wherein learning and note-taking surpass, for once, the urge to sketch