Globetrotting as a Local Sport

Living about an hour away from a large, relatively old city means I can go there, I don’t have to go there, so I rarely go there. You can know intellectually that you are near a goldmine, but gee, it takes effort to grab the pick, right? Well, this past weekend I grabbed the pick.

On Saturday morning I got on the bus here in Concord and 90 minutes later found myself in the heart of Boston, meeting up with my niece to start our 48-hour adventure together. We met at South Station and decided to head off to Boston Public Library, a famous place I had never visited.

The current incarnation of the Library was completed in 1895 and its main architect Charles Follen McKim dubbed it his “palace for the people.” I spent a lot of time taking photos, and made a commitment to myself to come back soon for a whole day, sketchbook in hand, of course.

The Library alone was stunning not to mention the Courtyard… 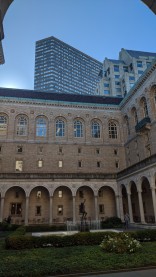 and the John Singer Sargent murals in the Sargent Gallery.

From there we traveled by subway and foot to a delicious lunch at a North End Italian restaurant, then onward on the perfect fall day to my niece’s home in the East End, a stunning fourth floor brick-walled apartment with a surprise feature of private roof-top garden and seating area. The view of the Boston skyline from the rooftop was breath-taking.

Day 2: Our weekend together was actually designed around a Sunday afternoon gathering of  Urban Sketchers Boston , a first for me and very exciting! After brunch on Newbury Street with my niece and her friend Joanna, the three of us walked to the Urban Sketchers meeting place on the corner of Commonwealth Avenue and Berkeley St, near the Church of the Covenant.

This church is one of Boston’s many hidden gems. Built about 180 years ago in the Back Bay area and redesigned by Tiffany Glass and Decorating Company in 1896, we decided to visit inside before settling down to sketch outdoors. We were met at the door by the docent, a quintessential Boston elder woman, slim, classy, upright, dressed simply (think tweed) with hair pulled up and back in a casual bun. This lovely woman launched into her speech about the history of Back Bay and of the church, and directed us to the donation box with encouragement (but not pressure) to contribute. Understatement sold me of course.

Beyond the vestibule, we arrived in the main sanctuary and although the interior was very dark, I used my camera to zoom in on the windows and woodwork and was amazed at the beauty of this undoubtedly underappreciated building. I cannot fathom the costs to maintain such a place. This four-minute video  here gives just a small sense of how impressive our visit was.  I will return. 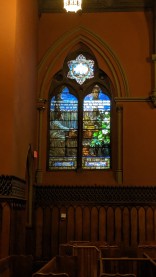 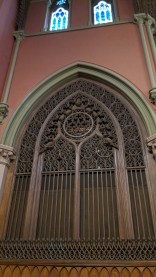 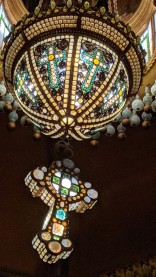 We eventually left the church and despite the chill in air, several regular members of Urban Sketchers Boston appeared right on schedule. After brief hellos, my niece, her friend, and I found a stone bench where we hunkered down for the next two hours. The three of us picked totally different subjects to draw (that always fascinates me): Joanna,  despite being a beginner, took on the hardest subject, the cathedral itself, and did an amazing job. Carra took on people, sketching two of the sketchers as well as the view of a distant steeple framed by the branches of a tree. Very creative! At one point the three of us got laughing at ourselves, joking about how wonky our sketches were, and one of the regular artists strolled by with a smile and said, “You sound like a bunch of giggling school girls!” Of course! Just because some artists may frown a bit, it is not because we are serious or unapproachable, we are just squinting, or thinking, “What the heck is going on here?” Carra, Joanna, and I were just there to have fun, thus the laughter. At about 3pm the ten of us reconvened around a park bench, laid out our sketchbooks, and admired each other’s efforts. 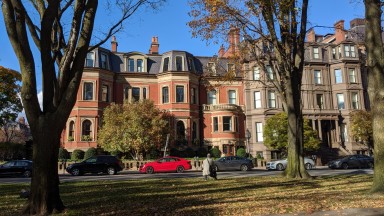 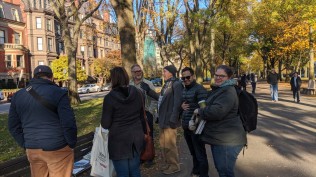 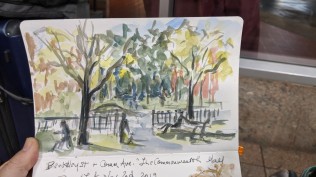 Urban Sketchers Boston meets every single weekend, year ’round, indoors and outdoors, being mindful to always choose meeting places that are accessible by public transportation. This is just the kind of group I have tried to create in Concord. In the meantime, wouldn’t it be great if a group of my ‘sketchy friends’ here could take the bus from Concord to Boston to draw with these folks again before springtime returns? What a great way to break up the wintertime blues. Whether it is at a cafe or museum or gallery in Boston, I am up for it.

As I rode the bus home to NH, something felt oddly familiar. It seemed like I was returning from another trip to England, without even having  gotten on a plane. For less than $40 round-trip, I can take the bus to Boston any day (especially when USk Boston is gathering), and by the end of the day I will have refilled my creativity tank. Sketching with others makes the whole experience so much richer.

If you’re interested, check out Urban Sketchers Boston on Facebook, and let me know when you’re up for joining me on the next Sketchbook Adventure! You will be amazed, guaranteed.

I live surrounded by watercolor brushes and paints, fountain pens, sketchbooks, and journals- often wanting more than anything to write and paint at the same time. If you like what you're reading, feel free to share it with others. If you see something that needs correction, please let me know. Thanks for visiting!
View all posts by Bobbie Herron →
This entry was posted in 1- Nuts: Graphic Styles, Pen & Ink, Sketchbooks, Urban Sketching (On-Site Creativity), Watercolor. Bookmark the permalink.

2 Responses to Globetrotting as a Local Sport