A few years back I came across a great video on the importance of doing watercolor value studies. I wish I had saved the link because I would love to give this man credit for changing my life.

The big shift for me was not even about value studies. It was about postponing homicide. Stay with me on this.

In this watercolor demo the instructor was using just one color: Payne’s Grey, Indigo, something like that, a strong blue black. The photo used for inspiration was a vertical black-and-white city scene, tall buildings, lots of contrast, but lots of detail as well. The instructor was breaking it down into five values: the white of the paper, light gray, medium gray, dark gray, and limited black to accent small features. No fiddling with in-between shading allowed.

He said that on a scale of one to ten (white being one and black being ten), most amateur watercolor paintings only show values ranging from about four to six. No punchy darks, no strong whites, more like a gentle watercolor Gregorian chant, eliciting a mildly enthusiastic, “Hmm, nice…” from most viewers.

This YouTube instructor worked along, painting and chatting, with great confidence, lots of encouragement for his viewers, but then, little by little, he started to lose it. He stammered a little, and then explained that it is very hard to talk and paint at the same time, which is true.

But I think something else was going on as well. He hadn’t stammered at the beginning of the painting because back then, he was in charge. Now halfway into it, the paper was not just ‘receiving’ paint, was not just listening, but it was starting to talk back. This happens in watercolor way more than in other painting medium for two reasons:

1- the ‘water+color’ can and do move on their own, thanks to gravity and the invisible capillary action on the surface and within the paper itself. Not only does watercolor paint have legs of its own, but

2- it changes color, dramatically, all the time! I am not kidding you, it does, all on its own, simply by drying. Every single color calms down when it dries, so if the color is right when you put it down wet, it will be dull and insipid when it dries. That is why you have to scare the heck out of yourself initially, train yourself not to flinch when you first put down the watery paint, otherwise you will end up with a dull-as-dishwater painting every single time.

When the video instructor got halfway into his demo, he realized he had misjudged the darkness of one of the three shades of gray (perhaps because it had dried!), and he tried to fix it without looking like he had miscalculated. To his credit, he did not start over, he did not stop the filming, he just kept going. What he did do was share a secret that has changed my artistic life. He said,

“Every artist who has been practicing their craft for any length of time knows that every painting goes through an Adolescent Period. This is when you have serious thoughts of giving up, chucking it all, and starting over again. If all paintings undergo this phase, how do you know if you are wasting your time on a disaster or simply hanging in there long enough to get to the other side? (You might well ask any parent the same question!) The thing is, you don’t know. But you can stop being surprised by it, and that in itself is a sort of victory. The silent muttering I do when I stop painting, look and look again, and decide how to proceed next, is a little moment of Homicide Postponement. This sketch demo might end up a total disaster, but I am not convinced it is time to give up quite yet. So let’s carry on…”

He moved along with the lesson, ending up with a very convincing late afternoon street scene, using just five values. As successful as his demo was, the long term take-away for me was the “expect to be annoyed at some point” lesson.

The high-wire balancing act I do while creating every single one of my watercolors will of course be invisible at my upcoming one-woman show here in Concord in March 2020. All the viewer will see will be the final credits, none of the scraps that ended up on the cutting room floor. When they say, “Gee, I wish I had your talent”, I will smile and simply say to myself, “Honey, you have no idea…”

It is not that a lot of paper ends up in the trash- that is more of a Mozart / Van Gogh / Hollywood depiction of an artist’s temperament. What goes unseen is the pause, the ponder, and the problem-solving. An average working artist has far more moments of ‘dang’ and ‘harrumph’ and ‘time to step away’ than any collector could imagine.

If you could be a fly on the wall of my studio you might hear, “What the heck am I doing? I have no idea what to do next. Must be that adolescent period. Time to walk away, have a cup of tea, and see if it simmers down while I am gone.”

And oddly enough, it usually does. 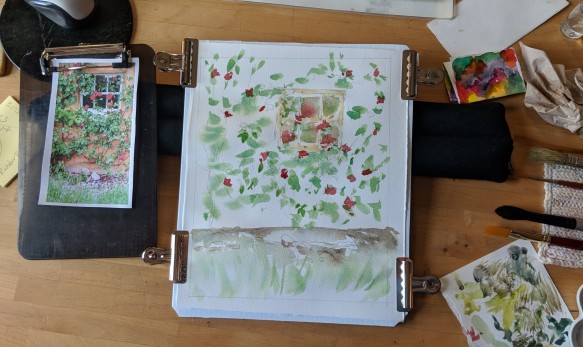 Flood in background color, not realizing it would be too yellow. Painted at night by incandescent light.

I live surrounded by watercolor brushes and paints, fountain pens, sketchbooks, and journals- often wanting more than anything to write and paint at the same time. If you like what you're reading, feel free to share it with others. If you see something that needs correction, please let me know. Thanks for visiting!
View all posts by Bobbie Herron →
This entry was posted in 1- Nuts: Graphic Styles, Watercolor and tagged Inspiration, Mentors. Bookmark the permalink.

11 Responses to That Dang Adolescent Period