I was walking back to my table at the café after having picked up my sandwich order at the server’s station. Suddenly in strode five police officers leading a homeless man in from the cold to interrogate him at a table near the front window. No problem, except for the fact that right next to that table I had parked all my belongings, shoulder bag, coat, scarf, hat, gloves, tablet, keyboard, sketchbook, notes. I had just gone over to get my dang sandwich and now suddenly there was a blue-uniformed wall between me and my stuff. Geesh, and here I was planning a mellow afternoon of writing at the café.

They were nice enough. While two of them interrogated the suspect, the other three officers stepped aside a bit when I gestured toward my things and whispered, “I’ll just move those items out of your way…” It took three trips for me to do so. No officer helped, I suppose that would have looked unprofessional. Once again I realized that when it is Café Wisdom time, I tend to tuck in.

The topic for today’s wisdom is Trust Your Gut. Maybe not when choosing a café table, but definitely when your gut says it is time to move. And when your gut says, write a blog post now and save the memoir work for later tonight.

To Blog or Not To Blog

A while ago I was waffling back and forth between keeping my blog going, and working on the first draft of a memoir. I didn’t think I had the time or focus to have both projects active simultaneously. My good friend Melissa Wiley told me that for her, writing her blog and writing books were two very different activities, that writing a blog post can be as casual as chatting with an interested friend (my words, not hers). I knew she felt that way but I just didn’t get it. Until I did.

Part of the shift happened for me while reading a wonderful book,  Good Prose,  subtitled, “The art of non-fiction: stories and advice from a lifetime of writing and editing.” The back-story of the relationship between Tracy Kidder and Richard Todd (writer and editor respectively) adds a dynamic energy to the book which I found  heart-warming and encouraging. 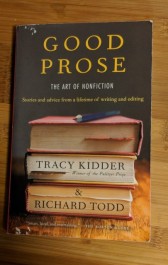 Nowadays I try to refrain from underlining in the books I buy because I want to be able to pass them along undamaged. I don’t always succeed, and this book was a great example of ‘failure’—I could not read it without highlighter in hand. The beginning chapters about story, character development, narrative styles were interesting enough, but as soon as I hit Chapter 3 ‘Memoir’ and Chapter 4 ‘Essay’, I was taking notes like I was studying for an imminent final exam.

My Own Writing Back Story

I began writing a memoir a few months ago, and many of the first draft stories have made it to this blog. When I am working on the memoir, using source materials (original letters and diary entries from each era), I am clear and contented. I know my audience for now is an audience of one: Me.

Not so with this blog though. It has taken me over a year to figure out who the heck you are. I thought you were scary at first. But now as my self-consciousness has worn off I have come to see that all I had to imagine was one interested reader, and I had everything I needed to continue. In “Good Prose”,  editor Richard Todd observes,

“…one of the problems with essay, as a form, is that everyone has written one. You can easily make your way through life without writing a novel or a poem, but it is hard to get out of high school without writing an essay.”(p. 66)

Todd goes on to say,

“Essays are a congenial form for a divided mind… Essayists tend to argue with themselves. The inner dialogue that might be suppressed in other writing finds a forum here. Montaigne blessed the form when he said, ‘If I knew my own mind, I would not make essays. I would make decisions.’ (p. 67)

“As an essayist you can sometimes feel like a public speaker who must build his own stage and lectern. Essayists are self-authorizing. This is the dilemma but also the pleasure of the form.  The chances are that nobody asked for your opinion. But if your idea is fresh, it will surprise even someone, perhaps an assigning editor, who did ask.” (p. 68)

Out of curiosity I searched the book’s index and found a single listing for “bloggers, 115-117”. I wondered whether the writers saw any difference between essays and blogs. Here is where I got to cringe a bit.

“An aggressive informality infects contemporary prose. The Internet has helped to spread it; informality is the natural voice of the blogger…The writer works hard to be lovable.” (p. 114-116).

Ouch, true. And there, I just did it again. My challenge now is to earn the honor of the time you spend here, and not assume that means you will invite me for tea or a sleepover any time soon.  I must keep those standards Miss Palmer drilled into our heads in AP English at Northfield, but be reasonably friendly at the same time (unlike Miss Palmer.) It’s like saying, “Have a seat, but keep your feet off the furniture.”

Stay tuned. Oh, and buy that book. It’s a keeper.

I sit here in my loft studio, surrounded by watercolor brushes and paints, fountain pens, sketchbooks, journals- wanting more than anything to write and paint at the same time. I am the fourth generation of journal-keeping women, starting in 1862, and I have read their words and between their lines. This blog was inevitable: thoughts on the unsung glory of women whose lives were recorded and transformed through their writing and art.
View all posts by Bobbie Herron →
This entry was posted in Cafe Wisdom, Storytelling. Bookmark the permalink.