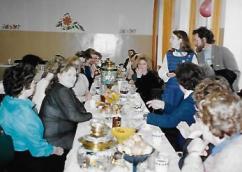 Although the main purpose of our trip was to work in schools spreading the hope of ecological consciousness to Russian children, we knew there were dignitaries to impress as well. By far the most important was Gennady A. Yagodin, Soviet Minister of Higher and Specialized Secondary Education. Yagodin was powerful, serving the USSR at the highest level from March 1988 until November 1991,  and we soon discovered that the mere mention of his name brought the cacophony of a room full of teachers to dead silence. When the Russian teachers learned that Yagodin was to be in the audience at the April 20th performance at the Institute, suddenly the chaos became a choreographed effort to help the Americans: spare extension cords materialized, schedules were cleared for a rented bus, and we discovered the power of uttering, “blah, blah, blah, Yagodin, blah, blah…”

Wed 19th- To the Institute to practice the show.

Thursday 20th- In the morning Ash did his lecture on education in America for a large group of spellbound educators. Our big show for a full auditorium, including Yagodin, began at 1:45pm, was a complete success, and was followed by young musicians and dancers performing for us. The day ended late with champagne, tea, many gifts, flowers, etc. Home late, exhausted and relieved.

[Note: As I reread my journal I go in and out of being able to discern the ‘unimportant details’. Despite almost three decades of time having passed since then, I am reliving every moment—the food, the smells, the noise, the struggle to smile when surrounded by a language I did not understand. The emotional and physical exhaustion I felt as an introverted spousal helper trying to blend in with a troupe of seasoned performers. Sergei translated with endless patience, but we all knew he was filtering information as needed.]

Sat 22nd- Lenin’s Birthday- Bus at 11am to Museum of Czars, and Gorky Park. Sergei heard of bombs found in subway that morning, put there by Armenian terrorists- saw art exhibit near Gorky. To Berioskas (Russian gift/snack shops.) then home— I slept from 5:30pm until 7:30am!

Sunday 23rd- Another drizzly day- 11am to Farmer’s Market & Arbat Street, many people and “art” along sides- Stopped at Georgian house for cheese turnover and green “limonade”- drizzly- 3pm back to bus & hotel- cheese & bread in room 5pm-7pm rehearsal while Ash & I ironed costumes. Back to our room to find still no hot water. Ugh, I’m ready to go home, and we’re only half-way done.

Tuesday 25th- Third week- I hate standing in line in a room which smells of mildew and pork fat, waiting to pick up a meal which disgusts me. I’m tired of tagging along on a month in Moscow, with no hope of escape to another town, let alone going home. Mealtimes were interesting at the beginning, but now it seems like an endless parade of fancy sweets and chunks of cheese. Enough to make anyone crabby, or at least constipated! Yesterday we went to Sergei’s school to perform, and our lunch at the Culinary School consisted of eclairs, white cakes and colored frosting. So the diet yesterday was Breakfast: bread, cheese, tea, eggs, –Lunch: sugar cakes– Dinner: cheese, bread, wine. I feel like I’m starting to get a “Russian face”- I can look people in the eye without smiling…. (Then later at 9pm) Good thing we went to Klin today—excellent day, the sun even came out, there was blue sky, minimal pollution (2 hours from Moscow), – great kids, and Ballet of Sleeping Beauty was wonderful. Best lunch ever- I wolfed down veggies, but also the main course of breaded chicken. I feel fairly fat despite “disliking” the food. It must be all the sweets- ugh. Tomorrow, less sugar no matter what.

My painting done from photo taken on bus back from Klin

Wednesday 26th- To Anglo School for Colburn & Stuart show, Hannah, Ash & I went along. Heard that “half” of the Soviet top-guys were fired, seen as a mandate for perestroika.  We had seen official cars heading to the airport that morning. Hannah and I painted roses in the room all afternoon, she did so well… Deborah & I went to the University to meet with big wigs about the concert hall, took the metro together. Dinner was bread & cheese again.

[Note: So the very same day that we heard that top officials in the Soviet government had been fired, Deborah and I took the Metro alone together to the University! Of course, we had no idea of the magnitude of violence happening in Georgia and other Soviet states. Up until 2017, Americans have taken reliable and open media sources for granted, and I see now that our high degree of comfort in Moscow in 1989 was no accident. We were made to feel comfortable and welcome and safe. The ‘appearance’ of glastnost at its best.]

Part 6 to follow– I assure you it will be the last installment!

I sit here in my loft studio, surrounded by watercolor brushes and paints, fountain pens, sketchbooks, journals- wanting more than anything to write and paint at the same time. I am the fourth generation of journal-keeping women, starting in 1862, and I have read their words and between their lines. This blog was inevitable: thoughts on the unsung glory of women whose lives were recorded and transformed through their writing and art.
View all posts by Bobbie Herron →
This entry was posted in Storytelling, Travel, Uncategorized, USSR 1989, Watercolor. Bookmark the permalink.

5 Responses to Part 5: The third week!